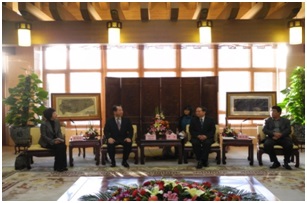 CAE President Zhou Ji met with a visiting delegation led by Dr. Hideaki Koizumi, Vice Chairman of the Foreign Affairs Committee of the Engineering Academy of Japan (EAJ), also a CAE Foreign Member, at the CAE office building in Beijing on December 5, 2012. Present also in the meeting were Xie Kechang, Vice President of CAE, CAE Member Wei Yu, Director of the Division of Information and Electronic Engineering of CAE, and Ms. Chen Yangqiu, Deputy General Manager of the Hitachi (China) Research and Development Company Limited.

Zhou pointed out that, as China was now facing a special period featuring economic transformation, China would adhere to innovation-driven sustainable economic and social development as well as the protection of ecological environment. Zhou also expressed his hope to further strengthen cooperative efforts with EAJ in the prioritized areas such as space, nano technology, mechanical engineering, renewable energy, etc, and bring the cooperative relationship between CAE and EAJ to a strategic level, helping to promote the transformation of China. Besides, Zhou briefed Dr. Hideaki Koizumi on current international cooperation of CAE, who also hoped that the roundtable meeting among China, Japan and South Korea, should be resumed at certain time. Finally, Zhou invited Dr. Hideaki Koizumi to make a keynote presentation on behalf of the research team for the project entitled “Brain Science and Information System Research” at the International Engineering Science and Technology Conference to be held in 2014, sharing scientific research findings and playing due roles as a Foreign Member of CAE.

Dr. Hideaki Koizumi thanked President Zhou for his time and hospitality. He also spoke highly of achievements CAE had made during the past 18 years of development. Dr. Hideaki Koizumi pointed out that innovation should not be confined to science and technology innovation, it also referred to changes in people’s mode of thinking, that is, new notions, new policies, etc. Also, he extended full conviction in more in-depth and effective exchanges and collaboration between both sides in the future. (By Zhu Yu, December 2012, translated by Liu Chang)