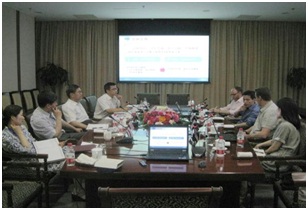 Pan Yunhe, Executive Vice President of CAE, met with Zhang Yuguo, Chairman of the China Zone of the Science & Technology Division of Elsevier, UK and his delegation in CAE Office Building on June 7, 2012. The other two visiting delegates were Ben Denne, Publishing and Marketing Director, and Jonathan Simpson, another Publishing Director, both with the China Zone of Science & Technology Division of Elsevier, UK.

First of all, pan extended warm welcome to visiting guests, who then briefed on general information and major tasks of the Chinese Academy of Engineering. Ben Donne gave an introduction to the general development of Elsevier in the past years. Subsequently, Song Dexiong, Deputy Director-General of the General Administration Department of CAE, gave a briefing on the construction of the China Engineering Science and Technology Knowledge Center.

Both sides discussed issues like the development of digital library technology, the characteristics and feasibility of CAE’s Knowledge Center of being non-profit and open to the public, etc. Zhang said that, as the largest publishing company in the world, Elsevier would love to join hands with CAE, the honorary and advisory academic institution that enjoys great reputation in the engineering science and technology sector in China, in the construction of the China Engineering Science and Technology Knowledge Center, and make its due contributions. Pan expressed his expectation for the realization of more joint efforts in the future. (By Wu Lan and Zheng Xiaoguang, June 2012; translated by Liu Chang)