The 13th International Fruit/Vegetable /Food Exposition, co-sponsored by the Chinese Academy of Engineering (CAE), the U.N. Economic and Social Commission for Asia and the Pacific (UNESCAP), the U.N. Asian and Pacific Centre for Agricultural Engineering and Machinery (UNAPCAEM), the U.N. Asian and Pacific Center for Transfer of Technology (UNAPCTT) of ESCAP, the Ministry of Commerce, Ministry of Science and Technology, Ministry of Agriculture, the State Administration of Foreign Experts Affairs (SAFEA), the State Forestry Administration, the All China Federation of Supply and Marketing Cooperatives, the Shandong Provincial People’s Government, and mainly organized by the Yantai Municipal People’s Government, was opened at the International Exhibition Center of Yantai on September 23, 2012. 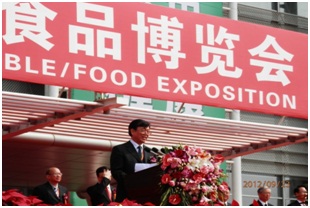 The opening ceremony witnessed the presence of CAE Vice President Gan Yong, CAE Member Shen Guofang, also Chen Guang, Vice-Chairman of the Shandong Provincial CPPCC, Bi Meijia, Chief Economist of the Ministry of Agriculture, representatives from relevant ministries and commissions, envoys of various countries as well as people representing Yantai’s Overseas Friendship Cities and other foreign friends. The Expo was also attended by participating businesses from countries and regions such as France, Spain, Belgium, Thailand, South Korea, Japan, Indonesia, Singapore, Sri Lanka, Taiwan of China, Hong Kong of China, as well as 26 provinces, municipalities or autonomous regions in the mainland of China. Participants from all over the world gathered in Yantai and carried out various activities like trade negotiations, technical exchanges as well as product exhibitions centered on different types of fruits, vegetables and food. The theme of the Expo was “Green, Health and Future”. 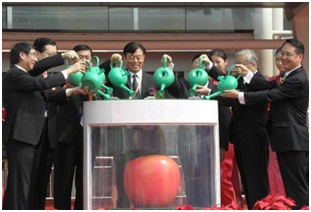 After the opening ceremony, Mayor Wang Liang met with CAE Vice President Gan Yong, former Vice President Shen Guofang, as well as Bi Meijia, the Chief Economist, at Dong Shan Hotel in Yantai. Wang thanked CAE and the Ministry of Agriculture for their guidance and assistance for Yantai City through the years, stressing that Yantai had already laid sound foundation in fields like agriculture and food industry, with unique characteristics well formed in its fruits, vegetables, food and wine industries, thus enjoying very probable broad prospects for future development. Wang also expressed his hope that CAE and the Ministry of Agriculture continue to strengthen guidance and assistance in agricultural and sideline products processing, food processing, among other fields, propelling the safe and efficient agricultural development as well as green food development to a new level.

Gan spoke highly of the economic and social development of Yantai, praising that this Expo was well-prepared and proved to be a great success. Gan also hoped that more expos like this would be held in the future regularly, promising that CAE would always stay supportive of expos like this.

Shen recalled the history and development of the fruit/vegetable exposition in the past years, emphasizing on genuine support and expectations former Presidents of CAE, that is, Song Jian and Xu Kuangdi, had for it and of it. Present also in the meeting were major leadership from Yantai Party Committee as well as relevant officials from the Department of International Cooperation of CAE. (By Han Yuqin, October 2012; translated by Liu Chang)