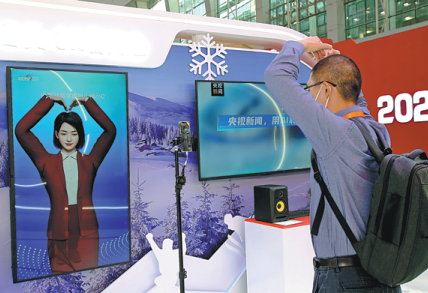 China's internet media have played a positive role in helping the country fight the COVID-19 pandemic in the previous months, said Zhong Nanshan, an academician at the Chinese Academy of Engineering.

The central government has put people and their lives first and introduced a series of effective and concrete measures, including the prevention and control mechanism at the grassroots level, "early isolation, early diagnosis and early treatment", and mass nucleic acid testing after the outbreak of COVID-19, said Zhong, who is the nation's top epidemiologist.

Internet media have been vigorously guiding the public to improve their awareness of epidemic control and prevention, facilitating the effective implementation of these key measures, he said.

Zhong made the remarks at the 2021 China Internet Media Forum held in Guangzhou, Guangdong province, on Thursday.

As a result of government efforts and publicity provided by internet media, most Chinese voluntarily wear masks, reduce participation in social activities and cooperate with epidemic control measures such as nucleic acid testing and tracking of close contacts to cut the spread of the virus, he said. This has made China the country with the lowest COVID-19 infection rate－8.9 out of 100,000－and the lowest mortality rate－0.4 out of 100,000－in the world, he added.

With the positive publicity of internet media, China's vaccination rate had reached 76 percent as of Wednesday, laying a good foundation for herd immunity in the country, Zhong said.

He estimated that China's vaccination rate would be able to reach over 80 percent by the end of the year.

"COVID-19 has been effectively contained in China for nearly 20 months since April last year, which greatly helped the nation's economic recovery. China's internet media have made great contributions during the period," he added.

"The Hong Kong government is making efforts to improve the efficiency of government information publicity, including more extensive use of the internet, mobile platforms and social media, so that information can reach more citizens faster," Lam told the forum via video link.

Zhou Shuchun, publisher and editor-in-chief of China Daily, urged China's media to continue to seize the new opportunity brought by a new round of global media competition, tap the new space of internet communication and make full play of the internet's role as the most powerful multiplier in building up China's international communication capacity.

The Chinese media should balance providing high-quality content and expanding recipients in the new era of internet media, so as to keep telling good stories about China and making the country's voices better heard globally, he said.

The increasingly grave and complicated external environment has brought unprecedented challenges to Chinese media and has drawn more attention to the country, he said.

China's mainstream media, including China Daily, participated in the forum.

Special parallel forums, including a Greater Bay Area summit, were also organized for media to exchange views on the development of the media industry in China and the world.