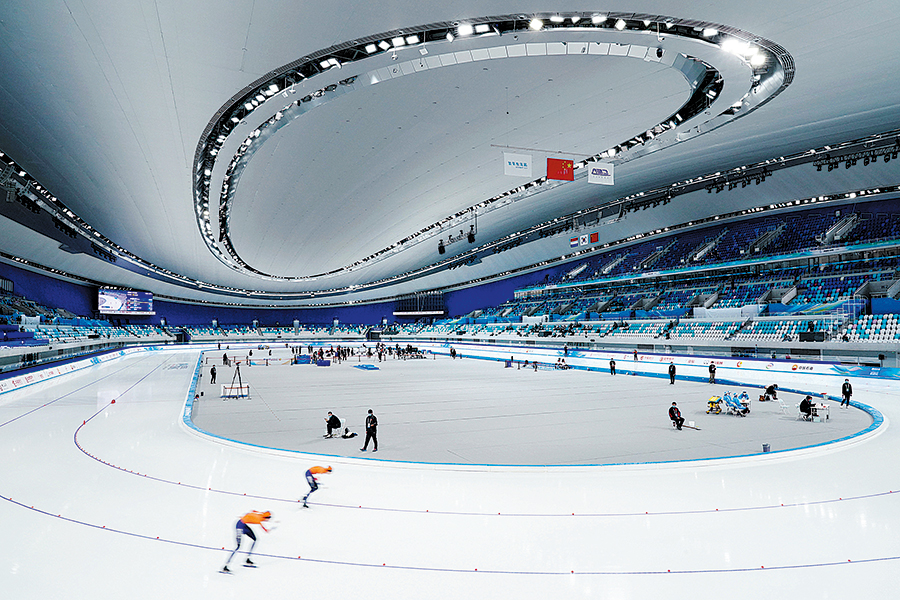 The National Speed Skating Oval boasts eco-friendly ice-making systems that use carbon dioxide as a refrigerant－a first for the Winter Olympics. XINHUA

Committed to hosting green Winter Games, an eco-friendly ice-making system is set to make its Olympic debut at Beijing 2022.

Two types of refrigerants－carbon dioxide (R744) and R449A－are involved in the process, which the organizing committee chose following careful deliberation and consultation with experts from home and abroad.

Of the nine ice rinks in the seven competition venues for Beijing 2022, five use CO2 for ice-making; the other four use R449A. It is the first time a natural CO2 refrigeration system will be used at the Winter Olympic Games.

In fact, it was the R507 refrigerant that was first considered when organizers began to devise their ice-making plans. R507 is widely used across the globe and meets the requirements of the Montreal Protocol on Substances that Deplete the Ozone Layer for developing countries.

Given that R507 has a comparatively high Global Warming Potential (GWP) of 3985, Beijing 2022 ultimately decided to turn to greener refrigerants.

After looking into global development trends in the application of refrigerants, and conducting discussions with refrigeration and air-conditioning experts, organizers decided to implement an alternative, greener ice-making plan with the support of the International Olympic Committee (IOC).

Venues that need to make and maintain ice all year round, including the National Speed Skating Oval, use natural CO2 refrigerant. By contrast, venues that only occasionally make ice, such as the National Aquatics Center and the National Indoor Stadium, use traditional refrigerant.

CO2 has zero Ozone Depletion Potential (ODP) and a GWP of just 1.The so-called "transcritical" CO2 refrigeration system was recommended as an ice-making solution for the National Speed Skating Oval by a panel comprising a dozen academics from the Chinese Academy of Engineering and Chinese Academy of Sciences, senior experts from domestic refrigeration associations, and representatives of the construction team.

The Capital Indoor Stadium boasts eco-friendly ice-making systems that use carbon dioxide as a refrigerant－a first for the Winter Olympics. XINHUA

The transcritical system features high security, low energy consumption and operational costs, and is environmentally friendly, according to Zhang Xinrong, a professor at Peking University and a renowned expert in thermal engineering and natural refrigerants.

In addition, the heat generated from the process can be recycled, which increases the energy management efficiency with integrated cooling and heating. The system is key to energy management at the ice venues, while experts say it potentially can have broad applications across the world.

"Experts from international federations told us that common eco-friendly ice-making practices at the National Speed Skating Oval would meet Olympic standards. But we spent 18 months studying ice-making from previous Winter Olympic Games and analyzing the pros and cons of every type of refrigerant. Eventually, we were able to come up with better solutions," said Song Jiafeng, an engineer with the venue's construction team.

According to Song, using carbon dioxide as a refrigerant can increase ice-making efficiency by 30 percent and save around two million kilowatts of electricity per year.

The choice was applauded by the IOC, which "fully supports" the decision and its implementation.

"We thank you very much for your decision to use CO2 as the refrigerant for the National Speed Skating Oval. You shall be commended for this important and responsible decision, that will be a very strong asset to support Beijing 2022 sustainability ambitions and commitments as regards Olympic venue infrastructure," wrote Pierre Ducrey in an email to Beijing 2022 organizers.

When it comes to venues that only require occasional ice-making, the National Aquatics Center, the National Indoor Stadium, and the Wukesong Sports Center are also shining examples of Beijing's environmentally friendly approach, as legacies from the 2008 Summer Games.

Beijing 2022 organizers conducted feasibility research with equipment suppliers, engineers and service providers of the venues before deciding on using R449A.

R449A is a lower-GWP alternative to R507, as confirmed by organizations including the Air-Conditioning, Heating and Refrigeration Institute. R449A has a GWP of 1282, 68 percent lower than that of R507.

Art Sutherland, who has worked as a consultant for the IOC for three decades, told Beijing 2022 organizers that their decision to use CO2 and R449A won "huge applause from the whole audience" at the Atmosphere America convention.

"Your decision to use low-GWP refrigerants has already had a ripple effect throughout our industry. There have been several new ice rink projects in China as well as a few more in North America that are now also planning on using low-GWP refrigerants as a result of your leadership," he said.

"Your decision has put the importance of low-GWP refrigerants on the world stage and will be the tipping point in our industry internationally as well."