Shanghai began implementing a three-zone epidemic control system on Monday that categorizes communities based on the level of COVID-19 infections, which will allow some residents restricted movement.

The city, which has been under lockdown, released a list of more than 17,600 communities based on the latest citywide nucleic acid test results that were available on Monday morning. The list will continue to be updated in accordance with the categorized epidemic control system.

Communities were categorized into three types of zones: lockdown (7,624 communities); controlled (2,460); and precautionary zones (7,565). District governments have begun releasing the status of communities via social media platforms such as WeChat.

Lockdown zones refer to neighborhoods that have reported new infections in the previous seven days, and residents are required to stay at home for a week under closed-loop management.

Controlled zones refer to neighborhoods where no infections were reported in the previous week. Residents are allowed to retrieve food deliveries or take a walk at designated spots at staggered hours within the compound.

Precautionary zones are communities that have not reported infections over the past 14 days. Residents can leave their neighborhood but must stay within their subdistrict, and they are encouraged to limit their movement.

Gu Honghui, deputy secretary-general of the Shanghai municipal government, said the categorization list is subject to changes based on infection situations in communities, and the government will update and publish it regularly.

"Our principle, as always, is to strive to minimize the impact of the epidemic on residents' daily lives," he said at the daily briefing on the city's epidemic control situation.

As the spread of the virus through the city is still at a high level, residents in precautionary zones are also advised to avoid unnecessary activities outside their homes and to continue working remotely, Gu said.

Shanghai registered 26,087 COVID-19 local infections, including 914 confirmed cases, on Sunday. The daily number of newly reported infections in the city has surpassed 20,000 for four consecutive days.

Liang Wannian, head of the National Health Commission's COVID-19 task force, said on Sunday that epidemic control measures such as lockdowns may cause temporary inconveniences, but they are necessary in the long term.

"Take Shanghai, for example. We've taken strict measures in order to think about the big picture of the entire country, including the municipality itself, to get back to normal in the long term," he said.

The city's health authority said that more than 3,000 people who tested positive for COVID-19 were released from medical observation on Sunday after recovering. It was the highest number of COVID-19 patients released in a single day, since the current outbreak started in March.

"Recovered individuals must undergo seven days of self-health monitoring at home, refrain from going out, stay in a well-ventilated room separate from their family members if possible, and avoid close contact with them," she said.

Hu Bijie, who is on the expert team for COVID-19 medical treatment in Shanghai, said there was no evidence showing that recovered patients were spreading the virus.

"Even though there are reports at home and abroad that recovered COVID-19 individuals showed varying degrees of testing positive again, we have found that they haven't caused infections in the surrounding population," said Hu, who is also director of Shanghai Zhongshan Hospital's department of infectious diseases.

Zhong Nanshan, a prominent respiratory expert and an academician of the Chinese Academy of Engineering, said on Friday that some countries have decided to coexist with the novel coronavirus due to the Omicron variant's relatively milder symptoms and lower fatality rate, but the strain can lead to many deaths if antivirus restrictions are entirely lifted in China.

"Completely opening up does not fit China's situation," he said. "In China, we should stick to the dynamic zero-COVID strategy and ease policies gradually in the future."

On Sunday, Liang, head of the National Health Commission's COVID-19 task force, also stressed that for now the full implementation of the dynamic zero-COVID strategy will bring the best outcomes at the lowest cost.

As the novel coronavirus will likely acquire more dangerous mutations in the future, adhering to the dynamic zero-COVID strategy remains the best option for China, including for Shanghai, Liang said.

"The recent round of outbreaks driven by the Omicron variant should not be handled as a flu epidemic," Liang said during an interview. "It spreads faster and in a more covert way than the flu virus, increasing the danger of causing a large-scale transmission."

Zhang Wenhong, head of the infectious disease department at Fudan University's Huashan Hospital in Shanghai, also called for more attention to be given to protecting the most vulnerable groups during the epidemic.

Global data has shown that elderly people who have not been vaccinated are the group most vulnerable to COVID-19, he said in an article published by People's Daily on Saturday.

Wang Xiaoyu in Beijing contributed to this story. 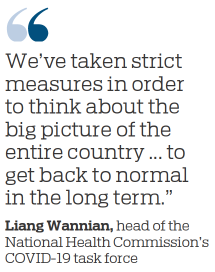