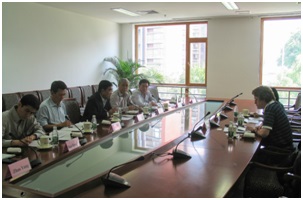 CAE Vice President Xie Kechang met with Dr. Magnus Breidne, Vice President of the Royal Swedish Academy of Engineering Sciences (IVA), Sweden, at the CAE Office Building on the morning of May 22, 2013.

Xie was pleased to recall the long-standing friendly and cooperative relations between the CAE and IVA, as well as past achievements in fields like renewable energy, environment and energy efficiency through collaboration. In addition, Xie suggested that more cooperative efforts should be made in personnel exchanges, sustainable energy and environmental protection technology, power generation with wastes as well as life sciences including translational medicine between the two Academies in the future. He also extended his hope to host the Sino-Swedish Forum on Strategic Emerging Industries jointly with IVA, who also invited an IVA delegation to attend the 2014 Engineering Science and Technology Conference to be held in Beijing.

Xie also briefed him upon request on the energy policies and status of energy research in China. He said that, in recent years, energy production and consumption in the world had been undergoing significant changes, and China was no exception. China was striving to promote the revolution in energy production and consumption, adjust energy structure, improve energy efficiency, as well as promote the clean and efficient use of conventional energy, aiming at achieving diversified energy sources, refined energy supply, coordinated energy structure as well as intelligent operation. During the meeting, Xie gave detailed answers to questions raised by Dr. Magnus Breidne. Last but not least, he expressed his hope that Dr. Breidne help to let more Swedish people know the great efforts that China had made in energy conservation and emission reduction, as well as protection of the environment for all human beings in the world.

Dr. Magnus Breidne thanked Xie for his briefing and answers at the meeting, also for the tremendous work that the CAE had done when the Swedish King came to visit China in 2010. He extended willingness to further strengthen cooperation with CAE in relevant fields in the future, intention to co-host the Sino-Swedish Forum on Strategic Emerging Industries with the CAE. Dr. Magnus Breidne also offered to send a delegation of experts from IVA to attend the 2014 Engineering Science and Technology Conference.