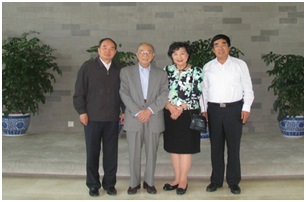 CAE President Zhou Ji and Vice President Xie Kechang met with visiting Norman N. Li, a Member of the National Academy of Engineering (NAE), USA, also a Foreign Member of the Chinese Academy of Sciences (CAS), at the CAE Office Building in Beijing on the morning of May 14, 2013. Both sides exchanged viewpoints extensively as to issues like strengthening the innovation cooperation in engineering science and technology, promoting the science and technology personnel exchange, enhancing educational exchange, as well as boosting the publication work in engineering science and technology between China and the USA in the future.

President Zhou Ji thanked Norman N. Li for the great contributions that he had made to help promote the Sino-US engineering science and technology exchange and talent cultivation. Zhou said that China would adhere to the strategy of scientific and technological innovation. Therefore, CAE would love to strengthen collaboration and exchange in terms of innovation policies, talent cultivation, as well as other topics to the common interest of both. Zhou also briefed the guests on initial plans for the publishing work of CAE journals, hoping that Norman N. Li would give due attention to and provide due support to this work in the future.

Norman N. Li congratulated Zhou and Xie on their being elected NAE Foreign Members. He also sang high praise for the significant role CAE had played in China-America Frontiers of Engineering as well as projects on smart grid, clean energy, bio-medicine and so on. He hoped that both sides should further develop the cooperation mechanism and better promote the Sino-US cooperation in science and technology. Besides, Norman N. Li also pledged to make suggestions and contributions to the CAE journal publishing work. Both sides also discussed issues such as electric vehicles, advanced manufacturing as well as energy-conservation and environmental protection, and so on.

Kang Jincheng, Deputy Director-General of the Department of International Cooperation of CAE, and Xu Jin, Deputy Inspector of the same Department, were also present at the meeting. (By Zhu Yu, June 2013; translated by Liu Chang)