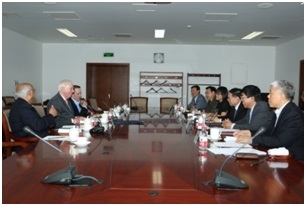 While the 2013 China-America Frontiers of Engineering (CAFOE) co-hosted by the Chinese Academy of Engineering (CAE) and the National Academy of Engineering (NAE), USA, was in session, leaders from both Academies conducted a bilateral talk on the afternoon of May 15, 2013. Zhou Ji, President of CAE, and Prof. Dan Mote, President-Elect of NAE, co-chaired the bilateral talk. The event was attended by Xie Kechang and Fan Daiming, both Vice Presidents of CAE, as well as Venky Narayanamurti, Secretary of Foreign Affairs of NAE, and Lance Davis, Executive Officer of NAE.

President Zhou, first of all, expressed thanks for his and Xie Kechang’s being elected Foreign Members of NAE. Zhou then recalled with enthusiasm sound cooperation between both sides in areas like the Global Grand Challenges Summit as well as the Smart Grid Project involving four Academies in China and the USA. Zhou also extended hope that CAE and NAE should further strengthen interaction and collaboration in the 2014 Engineering Science and Technology Conference, among other fields.

Vice President Xie Kechang pointed out that since both China and the USA came out top in terms of energy consumption and carbon dioxide emission in the world, and were faced up with the same challenges in energy conservation and emission reduction, they should combine energy and internet technologies and strengthen cooperation in fields like clean coal, improvement of power generation and supply efficiency, shale gas development and environmental supervision in the future.

Vice President Fan Daiming briefed on the general information about academic activities of the CAE. He also made suggestions as to strengthening the sharing of scientific and technological achievements made by both Academies by means of internet, as well as promoting the development of network-based diagnosis technology, etc.

Prof. Mote, first of all, extended appreciation for CAE’s hard work in organizing the 2013 CAFOE. He also expressed willingness to cooperate further with CAE in addressing grand challenges the whole globe was facing, adding that this kind of cooperation would not only do good to the two countries, but also benefit other countries in the world. Prof. Mote pledged that NAE would send a delegation to attend the 2014 Engineering Science and Technology Conference. Besides, he also hoped to make contributions to the organization of the Second Global Grand Challenges Summit in 2015 as one of the organizing countries. Also, Prof. Mote suggested that NAE cooperate with CAE in the field of future internet security, striving to help establish a global network that’s secure, credible, reliable, as well as highly adaptable.

Leaders from both sides expressed willingness and intention to further promote cooperation and agreed to carry our in-depth collaboration in internet security as well as strategic research on energy policies, etc.

Present also in the meeting were Kang Jincheng, Deputy Director-General of the Department of International Cooperation, and Xu Jin, Deputy Inspector of the Department. (By Zhao Yang, June 2013; translated by Liu Chang)