CAE Vice President Xu Rigan met with a visiting delegation headed by Gerard Keenan, Chairman of the Keenan Corporation, Ireland, at the CAE Office Building on May 10, 2013. Xu briefed Mr. Keenan on general information of the CAE as well as advisory work done in the fields of animal husbandry and dairy indus-try by the CAE in recent years. Gerard Keenan also gave a briefing on the diary industry as well as the feed technical system in Ireland. Besides, CAE Members Li Ning, together with Prof. Wang Jiaqi, Deputy Director-General of the Institute of Animal Sciences (IAS) of the Chinese Academy of Agricultural Sciences (CAAS), exchanged viewpoints in a compre-hensive manner with the foreign experts as to a number of technical issues during the meeting. 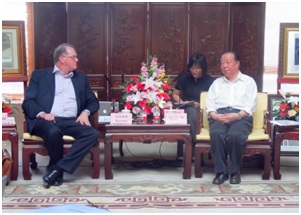 During the meeting, both sides also con-ducted in-depth discussions as to the possibility of developing new techniques that could be adopted and widely used in China in order to increase the production efficiency of its animal husbandry as well as safety of dairy products in China, by taking into account the actual situa-tions of China.