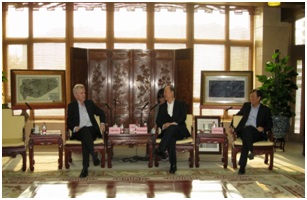 Xu listened to the overall plans of Sandvik Group to set up a research & development center in China, including specific R&D scale, targets, as well as cooperative partners. He also briefed on major iron and steel materials research & development centers in China, holding that it’s of great significance to establish a branch for Sandvik focused on basic researches and oriented for the domestic market in China. Xu hoped that both the Chinese and Swedish sides could further strengthen cooperation in R&D and industrialization, thus benefiting the two peoples in the real sense.

Olle Wijk affirmed the great significance of Sino-Swedish cooperation, saying that both he himself and the Sandvik Group had long attached great importance to collaboration with China. He also extended willingness to help build a platform and bridge for enterprises in both countries to join hands in the future in terms of joint research & development as well as industrialization.

Vice President Gan Yong discussed specific issues as to the establishment of a research & development center by Sandvik, expressing intentions to further develop bilateral cooperation in the future. Kang Jincheng, Deputy Director-General of the Department of International Cooperation, and Xu Jin, Deputy Inspector of the Department of International Cooperation of CAE, were present at the meeting. (Bu Zhu Yu, April 2013; translated by Liu Chang)