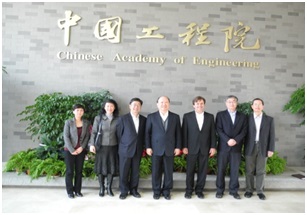 Xu Kuangdi, Honorary Chairman of the Fifth Governing Board of CAE, met with a visiting delegation headed by Mr. Eric Heitz, Chairman of the Energy Foundation (EF), USA, at CAE Office Building on February 27, 2013. Both sides exchanged viewpoints as to issues such as the development of new energy technologies and the present situation we were facing. They also reached agreement on the strengthening of cooperation in the field of new energy in the future.

Xu briefed the guests on researches conducted on China’s new energy. He pointed out that, as a big coal producer, China still imported large portion of coal and oil each year, with imported oil accounting for more than half of the amount consumed annually. Also, China ranked No. 1 in the world in car production, sales and energy consumption. Though the per capita energy consumption was about 1/4 that of the United States, it had already brought great difficulties to the ecological environment and city transportation. China’s economic development on the next stage should take domestic consumption increase and further urbanization as the driving forces, not relying merely on processing and trade any more. China should take the resource-conserving road of social development, and the development and utilization of new energy resources would play great roles in promoting China’s economic and social development in the future.

Xu thanked the Energy Foundation for having always been concerned about China’s energy problems and given a lot of help. He hoped that the Energy Foundation could further strengthen cooperation with China, promoting the sustainable use of energy as well as the research and development of new energy.

Eric Heitz said that, there was no denying that China had made great achievements in recent years, but there still existed some problems in energy and the environment. The “Thousands of Households Industrial Energy Efficiency Program” that the China Sustainable Energy Program of EF carried out in China was the biggest one of its type, aiming at studying how to improve energy efficiency. He hoped that the Energy Foundation could receive more funding from China, and enhance relevant studies in energy management and new energy utilization, jointly with China through continued and strengthened cooperation in the future.

The US Energy Foundation is a non-governmental and non-profit organization, headquartered in San Francisco of the USA. The organization was officially registered with the Ministry of Civil Affairs of China under the supervision and administration of the National Development and Reform Commission (NDRC). In 1999, the Energy Foundation set up the China Sustainable Energy Program (CSEP) in Beijing, the strategic goal of which was to promote China’s transition to a sustainable energy future by enhancing energy efficiency and renewable energy.

Since its establishment, the China Sustainable Energy Program of the Energy Foundation has carried out extensive and in-depth cooperation in the energy sector, with its funding mainly focused on 8 research areas, namely, low carbon development road, energy efficiency in construction, industrial energy efficiency, electric power, renewable energy, sustainable city, transport energy-saving and environmental management. So far, more than 1557 projects have been funded, and 441 organizations and institutions have enjoyed cooperative relation with the program. Therefore, it is safe to say that the Energy Foundation has made remarkable contributions to the enhancement of China’s energy efficiency and development of renewable energy.