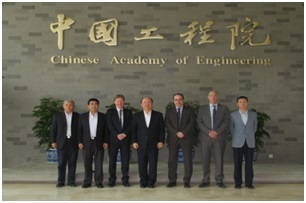 Xu Kuangdi, Honorary Chairman of the Fifth Governing Board of CAE, and Xie Kechang, Vice President of CAE, met with a visiting delegation led by Dan Hjalmarsson, Director-General of the Swedish Agency for Growth Policy Analysis (MTUA) in CAE office building in Beijing on March 22, 2013.

Honorary Chairman Xu Kuangdi recalled with delight the friendly and cooperative relations between the Chinese Academy of Engineering and it Swedish partners. He also briefed the guests on general information of the CAE Members, its major tasks as well as achievements from its major advisory projects. 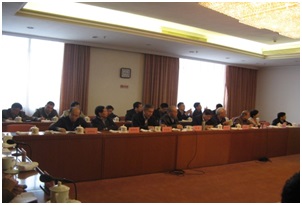 Vice President Xie Kechang briefed the guests on the general situation of energy development in China, especially on the progress of research and development in China’s unconventional natural gas. He pointed out that CAE and MTUA could further their cooperation in renewable energy and power generation with wastes in the future.

Director-General Dan Hjalmarsson gave a briefing on general information of MTUA, saying that MTUA carried out scientific studies in significant fields related to development, and conducted innovation evaluation, analysis as well as data based researches from both the domestic and international levels, based upon government’s requests. He also extended willingness of MTUA to further its collaboration with CAE in the future. (By Zhao Yang, March 2013; translated by Liu Chang)