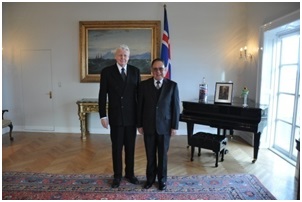 On March 15, 2013, Olafur R. Grimsson, President of Iceland, met with a visiting delegation headed by Song Jian, Honorary Chairman of the Governing Board of the Chinese Academy of Engineering (CAE), at the Presidential Palace. Both sides sang high praise for the close and friendly cooperative relations between China and Iceland during the past 40 years, and exchanged thoughts on future collaborative efforts. Song suggested that China hope to strengthen cooperation with Iceland in fields like ocean engineering, geothermal energy and fishery industry. President Grimsson extended his hope that engineering science and technology communities in both nations should make further cooperative efforts in fields like the utilization of geothermal energy, electric vehicles as well as other green and low carbon technologies. He also welcomed scholars and experts from the engineering science and technology community of China to come to the Iceland for field trips and extensive exchanges of opinions, aiming at mutual learning and mutual support.

During his visit in Iceland, Song also conducted field trips in the Iceland Marine Research Institute, the Geothermal Training Program of the United Nations University (UNU), the Marorka Ship Energy Company as well as the Hellisheiði Geothermal Power Plant, and exchanged thoughts with corresponding personnel from these institutions. (By Ren Hongtao, March 2013; translated by Liu Chang)