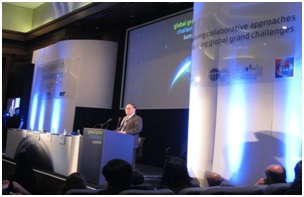 The Global Grand Challenges Summit is a major new initiative by the national engineering academies of the UK, the US and China. The summit brings together leading international thinkers and innovators to explore new approaches to solving some of the most pressing challenges of the 21st century. With the prosperity of future generations relying on unprecedented levels of inter-disciplinary and international cooperation in pursuit of solutions to the world’s most pressing challenges, the Summit, themed on “exploring collaborative approaches to tackling global grand challenges” and organized by the Royal Academy of Engineering (RAEng) in partnership with the National Academy of Engineering (NAE) of the US and the Chinese Academy of Engineering (CAE), sought to provide a new global platform for the world’s leading thinkers to share their ideas with the next generation of engineers on how to develop the international frameworks, tools and collaborations needed to tackle our common global challenges.

Sir John Parker, President of the RAEng, Song Jian, Honorary Chairman of the Governing Board of the CAE, together with Prof. Dan Mote, President-Elect of the NAE, addressed the opening ceremony of the grand event.

Upon recommendation of the CAE, CAE Member Zhang Jianyun, President of the Nanjing Hydraulic Research Institute (NHRI), CAE Member Zhan Qimin, Vice President of the Chinese Academy of Medical Sciences, along with Dr. Li Yingtao, President of the 2012 Laboratories, Huawei Technologies Co. Ltd, made brilliant presentations at the discussion sections dedicated to resilience, health, technology and growth respectively. They exchanged thoughts extensively with the audience as panel members.

Apart from plenary addresses, keynote speeches as well as theme-based discussions, the summit also witnessed Short Film Competition 2013 for College Students from the UK, US and China, calling for creative films highlighting the importance of engineering and how engineers can tackle global challenges, as well as Microsoft Student Day Engineering Innovation Competition. The awarding ceremony of the former was also held during the summit. In addition, representatives from eight top US universities, including Duke University, USC and MIT, announced the establishment of the new “Vest scholarship” program. The program, named after outgoing NAE President Charles M. Vest, will give select international graduate students the opportunity to pursue potentially world-changing ideas at top US universities.

Upon invitation of Sir John Parker, President of the RAEng, Chairman Song Jian made remarks at the closing session of the Global Grand Challenge Summit in which he illustrated the following points. First and foremost, Song defined “engineering science” as the essence and crystallization of modern sciences, historical experiences, cultures, arts as well as survival skills passed on from generation to generation—all these constitute and an important component of science. Secondly, He clarified that as the basic scientific studies were mainly driven by personal interest and curiosity, the engineering scientific studies were basically driven by demand of human society for survival and development. In the third place, Song pointed out that engineering science could lead the way and set development directions for societies, governments as well as politicians. CAE, as a national think tank in engineering science and technology in China, should play its due role as a significant advisor and consultant. Last but not least, Song welcomed participants of this event to attend the Second Global Grand Challenge Summit to be held in China in 2015. (By Ren Hongtao, March 2013; translated by Liu Chang)