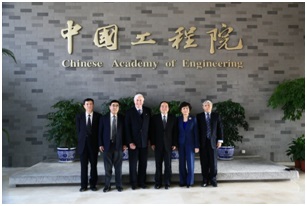 CAE President Zhou Ji met with visiting C. D. Mote Jr., Incoming President of the National Academy of Engineering (NAE), also the former President of University of Maryland at the CAE office building in Beijing on January 6, 2013. Zhou extended warm welcome to Prof. Mote for his visit, and congratulated him on the coming inauguration as the new President of NAE.

Zhou said that China had made significant achievements after three decades of reform and opening up, and China’s economy was undergoing a transition period of development. Therefore, innovation-driven innovation and engineering advancements would play an important role in its economic and social development in the future. And the Chinese Academy of Engineering would undoubtedly shoulder more responsibilities. As a matter of fact, CAE and NAE had conducted close and frequent cooperation in the past, making joint efforts in fields like the global satellite navigation system, smart grid, synthetic biology as well as Frontiers of Engineering Symposium. Zhou also suggested that both sides that had long enjoyed cooperative and close relation could further expand areas for future collaboration to advanced manufacturing, artificial intelligence, clean energy, biological medicine, innovation policy, personnel training, as well as other fields to their mutual interest.

Prof. Mote responded positively to the suggestion of further strengthening cooperation between CAE and NAE in the future. He also proposed that more collaborative efforts could be made in global and strategic issues. Both sides agreed to further expand strategic cooperation and carry our strategic studies while taking a global perspective and vision, thus leading discussions of and responses to major engineering challenges facing the globe. Prof. Mote also expressed willingness to help with the organization of the “Global Grand Challenges Summit” to be held in London in March this year, as well as the “China-America Science and Technology Strategic Policies Symposium” (theme is “smart grid”) to be held in Washington in May this year by four Academies (CAE, CAS, NAE and NAS) in two countries (China and the USA).

Present also in the meeting were Xie Kechang, Vice President of CAE, Xu Lin, Director-General of the Hanban (Confucius Institute Headquarters), and officials from the Department of International Cooperation of CAE. (By Zhu Yu, January 2013; translated by Liu Chang)