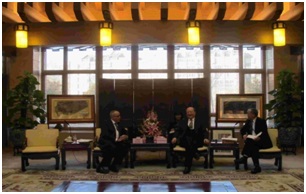 Xu Kuangdi, Honorary Chairman of the Governing Board of the Chinese Academy of Engineering (CAE), met with Claude Smadja, former Managing Director of the World Economic Forum (WEF, also known as the Davos Forum), also the President of Smadja Associates Strategic Advisory Firm, at CAE office building in Beijing on January 17, 2013.

Claude Smadjia thanked Xu for his time and hospitality. He also invited Xu to attend the opening ceremony of the “The Growth Net - The new constellation of growth in the global economy”, to be held in New Delhi in March 2013, as well the “Business China – Future China Global Forum”, to be held in Singapore in July 2013.

Xu spoke highly of the contributions that Claude Smadjia had made to the promotion of economic, industrial, commercial and social development in the world, especially in the Asia-Pacific region in the past decades as the Managing Director of WEF. Xu also thanked Claude Smadjia for his invitation. In addition, Xu sang high praise for the idea of “The Growth Net - The new constellation of growth in the global economy”, arguing that a dialogue that drew upon collective wisdom and all useful opinions as well as an international platform that encouraged mutual learning could play a significant role for the development of emerging economies. He suggested that entrepreneurs and economists from developed countries be invited to attend conferences organized by emerging economies. Xu also wished the “Business China – Future China Global Forum” a great success. (By Zhu Yu, January 2013; translated by Liu Chang)