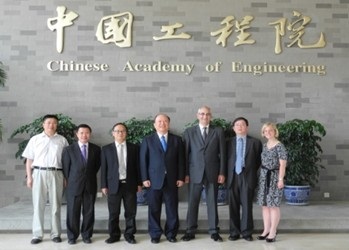 Xu Kuangdi, Honorary Chairman of CAE, met with Sir Keith O’Nions, Rector of the Imperial College London on July 2, 2012, exchanging views on the promotion of scientific and technological cooperation between both sides, talent cultivation, and so on.

After warmly welcoming Sir Keith O’Nions for his visit to CAE, Xu recalled the days when he was studying in the Imperial College London from 1980 through 1981 with great fondness. Xu also showed great appreciation for the consistence of Imperial College London in maintaining the fine tradition of being science, engineering and medicine based. Besides, Xu spoke highly of its efforts in enhancing exchanges between China and the United Kingdom, as well as the scientific and technological cooperation between institutions of higher learning and research institutes in both countries. In the end, Xu extended his hope that both sides further strengthen collaboration in the future so as to increase mutual understanding and tighten friendship.

Sir Keith O’Nions thanked Xu for his time and hospitality, who then briefed him on the general information of the Imperial College London, the focus of recent work, as well as its cooperative efforts with research institutes in China.