The 14th International Symposium on Viral Hepatitis and Liver Disease (ISVHLD2012) was opened in the Shanghai International Convention Center, Shanghai, on June 22, 2012. State Councilor Liu Yandong sent her Letter of Congratulations to this grand event, and Chen Zhili, Vice Chairman of the National Committee of CPPCC, addressed the opening ceremony.

Liu also said that, as the top-level international academic conference in this field, the fact that the International Symposium on Viral Hepatitis and Liver Disease (ISVHLD) was held in a developing country for the first time in its history shows recognition of the international community for the liver disease prevention and control work in China, which also offers great opportunities for China to learn advanced techniques and useful experiences in this field from other countries, and to strengthen international medical scientific and technological exchanges between China and the rest of the world. Liu also extended her hope that the huge number of science and technology personnel as well as medical workers in China should join hands tightly, making breakthroughs in key technologies in hepatitis and liver disease prevention and treatment jointly, improving the prevention, diagnosis, immunization and treatment level, so as to make greater contributions to safeguarding human health and well-being.

Vice Chairperson Chen pointed out in her speech that, the Chinese government and various communities in China attach great importance to the improvement of people’s health standards and health qualities, as a result of which, the life expectancy of the whole population increased from 67.9 years in 1981 to 73.5 years in 2010. Also, China has made significant progress in the prevention, treatment as well as scientific researche of viral hepatitis and liver diseases through the years. Yet, viral hepatitis and liver diseases remain serious hazards to human health, requiring joint efforts and positive response of all the countries in the world to carry out extensive international cooperation. She suggested that the symposium should stay focused on the theme, conducting in-depth academic exchanges, effectively promoting the scientific research and technological innovation in the prevention and treatment of viral hepatitis and liver diseases, thus making the broad masses of the people to live safer and healthier lives. 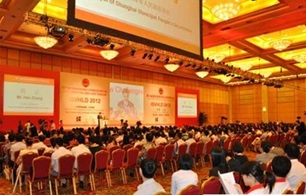 The 14th International Symposium on Viral Hepatitis and Liver Disease (ISVHLD2012) was sponsored jointly by the Chinese Academy of Engineering and the Shanghai Municipal People’s Government. Zhou Ji, President of CAE, and Han Zheng, Mayor of Shanghai Municipal Government, addressed the symposium. (By Wang Youjia from People’s Daily, June 22, 2012; translated by Liu Chang)