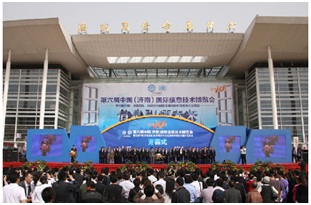 This Expo was jointly hosted by the Chinese Academy of Engineering (CAE), the U. N. Economic and Social Commission for Asia and the Pacific (UNESCAP), the Ministry of Industry and Information Technology (MIIT), the Ministry of Science and Technology (MOST), the State Administration of Radio Film and Television (SARFT) and the Shandong Provincial People’s Government, with its theme set on “Information Leading the Future”, and objectives on “Building a Platform for Cooperation, Creating an Exhibition Brand and Promoting Common Development”. The expo aimed at attracting domestic and foreign funds, technology and personnel in the IT industry extensively, promoting deeper integration and development of informationization and industrialization, and highlighting the concept of “information leading the future”.

As one of the major activities for the Expo, a thematic forum on “Information Technology Boosting Industrial Transformation and Upgrading” was held on April 26, 2012. CAE Member Wu Cheng made a wonderful academic report as a guest speaker. (By Zhao Wencheng, May 2012; translated by Liu Chang)