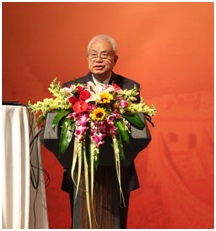 During the four-day sessions, 15 academicians and experts delivered invited lectures. Among them, Prof. Ted Brown, former ISRM President, made a presentation entitled “50 Years of the ISRM and Associated Progress in Rock Mechanics”, in which he reviewed the vigorous development of both ISRM and the field of rock mechanics in the past 50 years; while Prof. John. A. Hudson, current ISRM President, made a presentation entitled “The Next 50 Years of the ISRM and Anticipated Future Progress in Rock Mechanics”, in which he predicted the prospects for development of both ISRM and rock mechanics for the next 50 years. In addition, CAE Member Qian Qihu, Chairman of the Congress, delivered a keynote presentation on “New Development of Rock Engineering and Technology in China”, in which he introduced the brilliant achievements of engineering technology in large-scale rock engineering construction. Also, Prof. Feng Xiating, the newly-elected President of ISRM, made a presentation entitled “New Rock Mechanics Development in China”, in which he gave an introduction to the development of China’s rock mechanics and rock dynamics, as well as major research achievements in these fields.

In parallel discussion sessions for different sub-topics, a total of over 200 specialists and scholars made presentations, covering a number of major issues in rock mechanics, which led to heated and fruitful exchanges of thoughts.