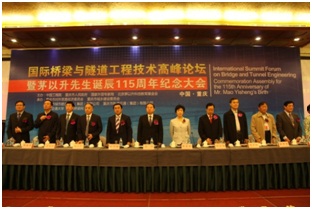 The forum was presided over by CAE Member Sun Yongfu, also former Vice Minister of the Ministry of Railways, and Chairman of the Railway Society. Pan Yunhe, Executive Vice President of CAE, Ling Yueming, Vice Mayor of Chongqing Municipal People's Government, and Mao Yulin, Secretary-General of the Mao Yisheng Science and Technology Education Foundation, served as the Director of the Organizing Committee of the forum and attended the event. Zhou Ji, President of CAE, together with Wang Zhizhen, Vice Chairman of the National Committee of CPPCC, also Vice Chairman of Jiu San Society, and Director of the Mao Yisheng Science and Technology Education Foundation, addressed the opening ceremony of the forum.

At the opening ceremony of the forum, congratulatory messages sent by Han Qide, Vice Chairman of the NPC Standing Committee, Chairman of Jiu San Society and Chairman of the Western Returned Scholars Association (WRSA) Council, as well as Qian Zhengying, former Vice Chairman of CPPCC National Committee, Honorary Director of Mao Yisheng Science and Technology Education Foundation, also CAE Member, were read out, by means of which all people present affectionately recalled the glorious life of Mr. Mao Yisheng. In addition, Awarding Ceremony of the “20th Mao Yisheng Science and Technology Award” was held and a charity project named “Mao Yisheng Public Bridge” was launched at the opening ceremony of the forum.

The theme of the summit forum was “Bridge and Tunnel Engineering: Now and Future”, and the purpose of the forum was set on “Exploration, Innovation and Development”. The forum was divided into two sub-forums namely, International Bridge Engineering Technology forum and International Tunnel Engineering Technology forum, held at two venues, in which academicians and experts specialized in bridge and tunnel engineering, home and abroad, made keynote speeches and conducted extensive discussions and exchanges as to engineering technology issues such as cross-sea bridge, tunnel construction technology, structural durability, wind and seismic resistance technology, rapid construction technology, and so on.

Starting from year 2011, the Chinese Academy of Engineering and the State Administration of Foreign Experts Affairs, have decided and begun to organize “High-End Symposium on International Engineering Science and Technology Development Strategy” jointly, in order to bring together top experts home and abroad and let CAE play the role of “National Engineering Science and Technology Think-tank” better, so as to provide better science and technology support for the economic and social development of China. And this forum is one of the series of activities named “High-End Symposium on International Engineering Science and Technology Development Strategy”. During the forum, “Seminar on International Bridge and Tunnel Development Strategy” was held, in which specialists conducted in-depth discussion and extensive exchanges of thoughts, shared latest research achievements in the field of bridge and tunnel engineering technology, and discussed both how to carry forward and how to make innovation in bridge and tunnel engineering technology, as well as how to cooperate and develop bridge and tunnel engineering technology, which has provided a high-level international platform for exchanges in order to promote the exchanges between China and the rest of the world in this field, as well as enhance the development of the bridge and tunnel cause in China. (By Zhao Qian, October 2011; translated by Liu Chang)