A visiting delegation headed by CAE Vice President Xie Kechang attended the China-America Sci-Tech Policy Strategy Symposium on Smart Grid held in the USA on May 31, 2013. The event was jointly hosted by the four leading science and engineering academies (namely, CAE, CAS, NAE and NAS) in China and the USA. The delegation also made survey and study tour for the project entitled “Strategy Research on China’s Clean, Efficient and Sustainable Use of Coal” and accomplished all tasks on the agenda. 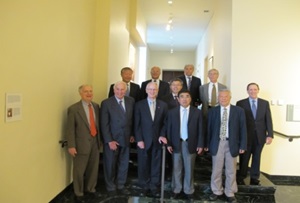 The US side attached great importance to the event and sent a delegation of 29 experts including the President of NAS, President of NAE, the President-Elect of NAE, as well as its Executive Officer to attend the symposium. A total of 21 people from both CAE and CAS attended the symposium, with CAS Member Zhao Zhongxian serving as the team leader on the Chinese side. Ten CAE Members such as Yu Yixin and Huang Qili attended all sections of the symposium. Vice President Xie Kechang attended the meeting on the second day, who then were present at the informal small-scale working meeting held by the four Academies.

The smart grid symposium held among the four leading Academies on both China and America sides covered five special fields. They were: 1) improvement of transmission capability of big grid, 2) stability control of big grid, 3) power generation capacity of big grid when absorbing renewable energy, 4) distributed energy and user efficiency and 5) China-US bilateral cooperation opportunities in the field of smart grid development. Experts on both sides conducted in-depth and heated discussions over these topics. 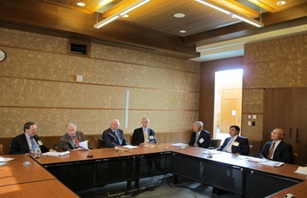 After the symposium, an informal small-scale working meeting was held. Attendees, first of all, reviewed the history of cooperative efforts made among the four Academies. They also spoke highly of this smart grid symposium and discussed possible forms and contents for future exchanges at the working meeting.

Vice President Xie and his delegation also made field studies for the project entitled “Strategy Research on China’s Clean, Efficient and Sustainable Use of Coal” after the meeting. They visited the Center for Applied Energy Research of University of Kentucky (UKy-CAER) and met with research fellows from the Argonne National Laboratory subordinated to the US Department of Energy. Academic exchanges and field studies were conducted with relevant officials and research fellows. 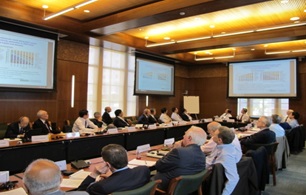 Capilouto, President of the University of Kentucky, met with Xie and his delegation. He expressed willingness to carry out a full range of exchanges and cooperation with the CAE, especially in the field of energy. Xie briefed him on the economic development of China, as well as its energy development and utilization, stressing that fruitful collaboration in the field of energy would benefit more than just China and the USA. Rather, people all over the world would benefit from the joint efforts.

Afterwards, accompanied by Dr. Liu Kunlei, the Deputy Director of UKy-CAER, Vice President Xie paid a visit to the laboratory. After more than half day’s visit and talk, Xie made an in-depth analysis of the development of carbon reduction and utilization technology, coal-based polygeneration as well as coal liquefaction technology under the new international situation. He also put forward comments and suggestions as to specific development directions, technical problems in existence, difficulties facing industrialization, as well as integration of new technologies for the previous aspects. In the meantime, Xie made in-depth review as to key elements for the applied researches conducted by the laboratory after getting a good understanding of them.

In the end, commissioned by Executive Vice President Pan Yunhe, Xie met with experts from the Argonne National Laboratory in Chicago. He briefed them on preparatory work CAE had done for the establishment of China Engineering Science and Technology Knowledge Center, as well as CAE’s efforts to establish an International Engineering Science and Technology Knowledge Center (Second Category) under UNESCO. Xie discussed with them the possibility to cooperate with their laboratory and the experts from Argonne National Laboratory showed great interest. (By Kang Jincheng, July 2013; translated by Liu Chang)