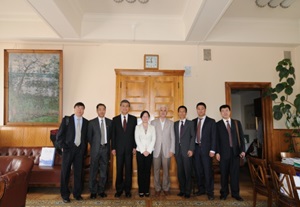 Upon invitation of the Russian Skolkovo Institute of Science and Technology, a delegation led by Pan Yunhe, Executive Vice President of CAE, visited Russia from May 30 to June 4, 2013.

On the morning of May 31, the visiting delegation paid a visit to the Headquarter of Romonosov Moscow State University and its Department of Computational Mathematics and Control Theory. Mr. Victor T. Trofimov, First Vice President of the Moscow University met the delegation. Prof. Alexander Razgulin and Andrey S. Krylov, both Vice Deans of the Department of Computational Mathematics and Control Theory, briefed on the general information of the Department, as well as researches conducted on computational science and technology by this Department. Studies and education of this Department on network and information security aroused great interest among the delegates.

In the afternoon, the delegation visited the Chinese Embassy in Russia, and held a lively discussion with Ambassador Li Hui on science and engineering development in both China and Russia, as well as future cooperation in engineering science and technology between the two nations.

On June 3, the delegation attended the Board Meeting of the Skolkovo Institute of Science and Technology. Skolkovo Institute of Science and Technology is a private research university in Russia, whose cooperation with the Massachusetts Institute of Technology (MIT) of the USA started in 2011. Its research interests focus on the following five fields, namely, biomedicine, energy, information technology, nuclear science and technology, as well as space science and technology. It aims at developing new technologies that will help address major problems facing Russia as well as the whole world, and cultivating global leaders with innovative and leading scientific knowledge.

Edward Crawley, Chairman of the Institute, also Foreign Member of the Chinese Academy of Engineering, received the delegation. At the Board Meeting, board members carried out discussions as to issues like research and education, innovation, campus development and financial patterns. As one of the Board Members of the Institute, CAE Vice President Pan Yunhe expressed his viewpoints regarding all issues on the agenda. He also sang high praise for the great achievements that Skolkovo Institute of Science and Technology had made in education, scientific research, the internationalization of education as well as innovation, and discussed with his Russian counterparts over exchanges and collaboration between the Skolkovo Institute of Science and Technology and the science and technology as well as education communities in China, especially with the CAE in engineering science and technology education.

In the afternoon, a few delegates visited the Center of Supercomputer of the Russian Academy of Sciences. This state-level scientific institution, which was founded in 1996, is the best supercomputer center in the fields of science and education in Russia, and it’s also ranked one of the top 100 computer centers in the world. The Center not only provides modern computing, electronic communication and information resources for researchers working with the Russian Academy of Sciences and the Russian Federal Science Center, but also offers computing services and project cooperation data processing platforms for the academic communities, industrial communities as well as government departments across the globe. The delegates visited the super computer room and gained a better understanding of the overall structure of the super computer. Ruslan Suleymanov, Center Official in charge of the Russian National Digital Library Project, briefed on the development of the project, the number and types of project resources as well as the services provided currently by this center.