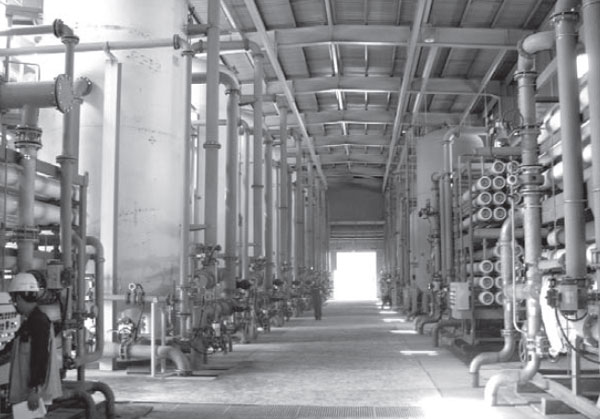 The project is to provide cutting-edge desalination equipment capable of producing 50 metric tons of clean water an hour.

Zheng Genjiang, general manager of HWTT, said that the project is one of the many overseas contracts the water treatment center has signed in recent years.

"We are also working with power plants in Indonesia and the Philippines, providing seawater desalination equipment to countries in Africa and the Middle East, and are now in discussion about similar projects with countries including Saudi Arabia and Pakistan," he said.

"The Belt and Road Initiative opens a new window for the center," he said.

He said he believes that as the Belt and Road Initiative moves forward, the center will receive more international orders.

"The related countries are rich in seawater supply but lack fresh water. We will solve those countries' problems. A good environment is what all people want and by exporting environmental technology, China will gain a better international image," he said.

According to market research firm Markets and Markets, the value of seawater desalination equipment will reach $15.27 billion in 2018, and the Middle East will be the largest market.

"The Middle East and Central Asia will be our target market in the future," Ren said.

Seawater desalination equipment is used in industrial projects, especially infrastructure construction. The equipment can largely reduce the usage of existing clean water. HWTT has focused on exploring the international market. It was also the first Chinese company in the field to appear in the global market. Last year, it won a bid that is the largest order ever for a Chinese seawater desalination company.

In July, HWTT announced cooperation with a steel company in the Middle East on a project to build desalination equipment capable of producing 150,000 tons of pure water each day. Manufacturing of the equipment has been completed and it is estimated to start operation in September, Zheng said.

"We are receiving more international recognition through such projects. Our technology in the seawater desalination area has already caught up with the most advanced in the world," he said.

Shentu Xunyu, technical director of the marketing section of HWTT, said that compared with companies in the US and Europe, Hangzhou's advantage lies in its greater variety of products and lower costs.

"Unlike our counterparts in Western countries, we can customize our equipment according to the needs of our clients. Therefore, the equipment can be used in more areas, such as medical and biotechnology," Shentu said. "We also have a complete industrial chain from research to after-sales service. By optimizing each part in the chain, we can help clients to effectively lower costs."

Its largest project in China is in Zhoushan, covering the clean water supply for all islands in the city. As an archipelago city, Zhoushan lacked its own clean water supply. Before 1997, clean water for the islands had to be transported from nearby cities. The price of 1 metric ton of clean water was 20 yuan ($3.20).

The desalination equipment lowered the cost to 5 yuan (80 cents) a ton and, even in severe drought conditions, can guarantee 1 ton of water for each Zhoushan resident each day. The time in which clean water is available has risen from only two hours a day to around the clock.

Gao Congjie, a researcher at HWTT and also a member of the Chinese Academy of Engineering, has been developing membrane techniques for almost 50 years. He said although Chinese companies still lack international recognition compared with famous overseas companies, it is only a matter of time until the center wins a larger market share.

"We started studying the technique in 1967, almost 20 years later than Western countries. After these years of effort, our technique is as good as theirs," he said. Gao said the center's technique is within the top 10 in the world and he expects it to join the top three within three years.