There will be fierce competition this year between foreign and Chinese robot manufacturing companies in the Chinese market, according to industry insiders.

"Big overseas robot companies have all entered the Chinese market after years of development. Some have even moved their headquarters and production base here," says Qu Daokui, president of the Shenyang-based Siasun Robot & Automation Co Ltd, China's biggest and the world's third biggest robot company with a market value of 35.4 billion yuan ($5.7 billion; 5.3 billion euros). 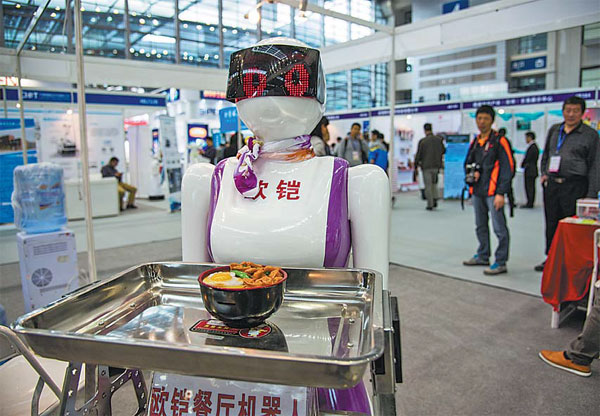 Above: A robot serves food at an expo in Shenzhen, Guangdong province. Below: An industrial robot delivers goods at an expo in Hefei, Anhui province. Photos provided to China Daily 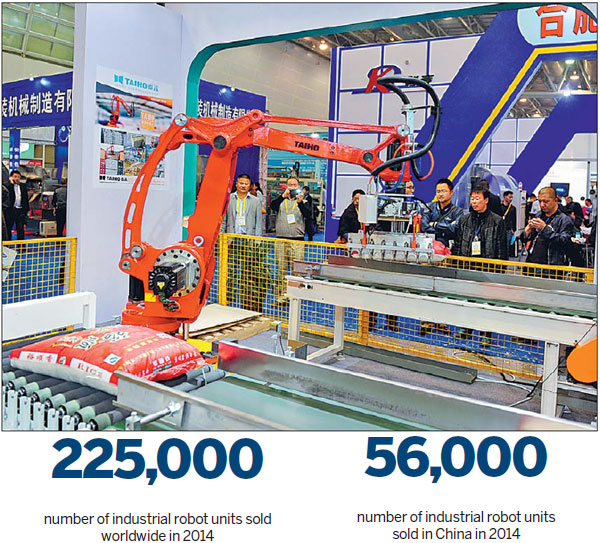 "Chinese robot companies have also seen rapid development in the past few years and have developed certain capacities, so naturally this year we will see fierce competition based on the laws of the market."

Qu was speaking at the 2015 China National Robotics Development Forum, held on April 13 in Beijing. The event was co-hosted by the Chinese Association of Automation and the China Association for Mechatronics Technology and Application.

China remains the world biggest market for robots. Chinese companies made 16,000 of the 56,000 robots sold domestically. By the end of 2014, there were about 500 companies in the sector, with 90 percent focusing on component manufacturing and project application. Qu expects the number to increase to 800 by the end of 2015.

As Chinese industries try to move up the value chain, and robots are one way of boosting a country's manufacturing competitiveness.

Countries such as the United States and Germany are developing robots as part of their manufacturing strategy.

The integration of humans and robots will become a key feature of next-generation robots, says Gu Chunyuan, chairman and president of ABB (China) Ltd.

"In the past five years, there have been some cases of robots collaborating with workers. But how robots can better cooperate with workers and how to make robots qualified workers on a production line, this is the latest trend but one that is also quite challenging for us," says Gu.

Another important aspect of developing robots is hiring people who understand the robotics industry, its safety, equipment and software requirements. As robots will be used in different industries - for example food and beverage - technicians should also understand that particular industry and combine both sets of knowledge.

"They need to understand not only the robotic industry, but the industry in which the robots are being used. This could affect the migration of talent because if the automotive industry needs more technicians, a technician from the food industry can't just be moved there. This could also be a challenge for the industry's development," he says.

Qu says when people talked about robots in the past, they thought more about industrial robots, but robots are used in many areas including healthcare, aviation and the service industries.

He says that compared with Western companies, most Chinese companies lack key technology, components and parts. Nor are the companies large enough to compete with the West. But the level of robot ownership in China also means there is huge market potential.

Wu Hongxin, from the Chinese Academy of Social Sciences, says Chinese companies and research should make more efforts to be innovative in order for Chinese robots to be more competitive in the marketplace.

"We cannot just make an effort in academic areas, we should also improve the performance and reliability of our products," he says.

Li Xiaodong, secretary-general of the China Association for Mechatronics Technology and Application, says China's demand for robots should also bring greater innovation. "It is a way of ensuring our robots have Chinese characteristics."

Qu says China's robot market is wide open and poses opportunities for Chinese and foreign companies. But, as China's robot industry is still evolving, it could be difficult for domestic firms to compete.

"Western robot companies have decades of experience and more advanced technology. Chinese robot companies have only been around for a few years and previously they could develop gradually inside the Chinese market. Now, with China becoming the main battlefield, their growth time is shorter and they have to meet world competitors before they are ready."

Qu says there will be industry upheaval in the Chinese market during the next five to eight years. Strong companies will survive, while weaker ones will probably die.

Innovation is crucial in order to guarantee a company moves up the industrial food chain, rather than getting kicked out, he says.