Tougher regulation urged on use of additives

Experts are calling for tougher regulation of the use of additives in food, but they also say there should be more public education on the substances, which actually play an important role in the country's food production industry. 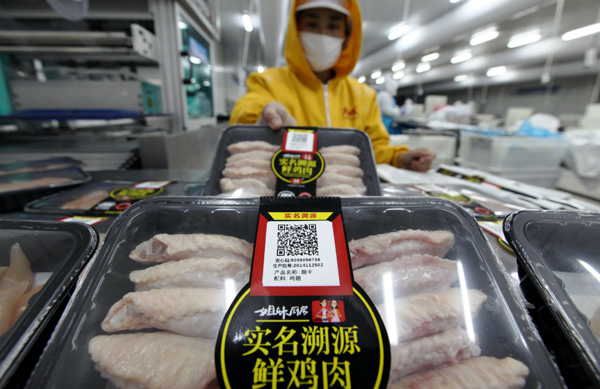 Quick response code is adopted by a food enterprise in Mengcun, Hebei province to help buyers trace related food safety information. Experts say some additives are often crucial to the manufacturing processes of some food, not only in ensuring flavor or color, but also in the preservation of the products. [Photo/Xinhua]

"I am often asked 'is anything completely safe to eat?'," says Chen Junshi, chief adviser at the Center for Food Safety Risk Assessment.

"People are genuinely worried about the use of too many food additives. Yes, people should be wary of food products which claim 'no colorings, no preservatives' on the packaging, but there is actually a lot of misunderstanding surrounding food additives, which has to be sorted," says Chen.

Experts point out that some additives are often crucial to the manufacturing processes of some food, not only in ensuring flavor or color, but also in the preservation of the products.

The Chinese food industry currently uses around 2,000 different kinds of food additives across 20 categories, with bleaching and bulking agents among the most common.

Sun Baoguo, an academician with the Chinese Academy of Engineering, who is also president of Beijing Technology and Business University, says nearly all food products actually contain additives, but the key issue is how to use them properly.

"Some food producers have been guilty of using excessive amounts of additives or even using banned substances to lower their production costs, and those are the ones which have caused a lot of the recent panic we have seen," says Sun.

"In many cases, it's how the additives are being used which is wrong, not the additives themselves－and this had led to additives practically being demonized by many consumers."

According to one recent online survey published in the China Youth Daily, 65 percent of respondents said they believed food additives were unhealthy, with 42 percent calling for them to be banned altogether.

The authorities closed 17 sites producing the sticks, arrested 41 people and seized 105 metric tons of what turned out to be poisonous material.

Another recent case involved a steamed-bun seller in Lishui of Zhejiang province, who was jailed for 10 months, fined 80,000 yuan ($12,900) and banned from selling food for two years, after using excessive amount of additives to make his buns whiter and softer.

Despite welcoming such actions, experts say the only way to fully restore people's confidence in food additives and their use is to introduce stricter standards and supervision of the food processing industry.

A majority of respondents in the China Youth Daily survey agreed the government should step up its efforts on clamping down on illegal additive use.

"Stricter management and supervision of the entire production process from original sourcing to processing through to supplying would certainly help reduce any risk to food safety," says Chen.

During the plenary session of National People's Congress in March, Premier Li Keqiang said the tightest possible supervision levels should be introduced right across the entire food production chain, and that any offenders should be given the most severe punishments.

The Health and Family Planning Commission has already said it has been working on making improvements to the country's food safety system, to bring it fully in line with international standards.

New compulsory national rules on food safety standards are now expected to be published in 2015, along with a website which will offer the public information on food additives and how they are used.

Chemical dyes used to color food and drinks; especially popular in many types of processed foods, beverages, and condiments.

Allow the smooth mixing of various ingredients without them separating; often seen in peanut butter, chocolate, salad dressings or margarine.

Commonly used in bread and other baked goods to add volume.

Help maintain moisture content; most commonly used in products such as soft candies and confectionary.

Maintain crispness and strengthen the structure of food.