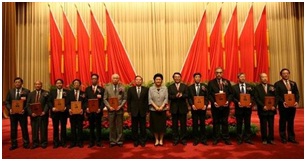 Awarding Ceremony of the 9th Guanghua Engineering Science and Technology (EST) Prizes was held at the plenary meeting of the 11th General Assembly of CAE on June 13, 2012. State Councilor Liu Yandong, together with Bai Chunli, President of CAS, and Zhou Ji, President of CAE, conferred prizes to award-winning scientists and engineers. 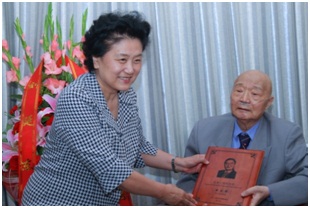 State Councilor Liu Yandong went to Beijing Hospital on the afternoon of June 13, visiting and greeting CAE Member Pan Jiazheng who had been receiving medical treatment there, as well as awarding him in person the “Achievement Award” of the 9th Guanghua EST Prizes. During the meeting, Liu spoke extremely highly of Pan’s innovative spirit, the enormous contributions Pan had made for the construction and development of the Chinese Academy of Engineering, and the strong support Pan had provided for China’s major engineering science and technology decision-making as well as development strategy planning. Besides, Pan’s enthusiasm for and efforts in the popularization of science and engineering also received high recognition. (By Liu Chang, June 2012)